I’ve been a big fan of Jim Carrey since my childhood and he remains my favorite comedic actor to this day. This is a tough list to compile and order, but that’s part of the fun. Here are my three favorite Jim Carrey films.

This cult classic is one for the ages. I wholeheartedly love this movie. Carrey’s lead character, Ace Ventura, is basically a fish-out-of-water in the story and provides a never-ending flow of humor based on his crazy, hilarious personality juxtaposed to the more serious antagonist and nature of the film. Plus, the legendary Miami Dolphins’ quarterback, Dan Marino, makes an appearance (as well as Dolphins’ coach, Don Shula). This film is a great comedy that will stand the test of time.

In what may be one of the more underrated films starring Jim Carrey, this one holds a special place for me. The star talent in this film only makes this movie that much better, featuring Jim Carrey as anchor Bruce Nolan, Morgan Freeman as God, Jennifer Aniston as Nolan’s girlfriend, and Steve Carell as an antagonistic news anchor to Nolan. My favorite aspect about Bruce Almighty is that even though it is a comedy and delivers on that aspect really well, it also has a touching theme and ending that adds depth to the film and brings everything together. 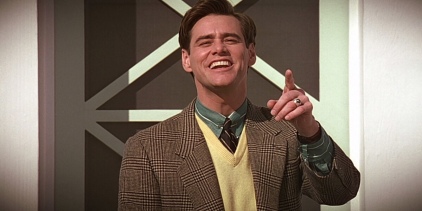 Deciding between The  Truman Show and Eternal Sunshine of the Spotless Mind is tough since they are both excellent, but the former of the two ultimately lands at the #2 spot on the list. This film sees Jim Carrey as Truman Burbank living a normal life working at a bank, but suddenly it begins to feel a little “too normal” once the truth starts to leak out about Truman Burbank’s life being fake and, in fact, a television show run by Ed Harris’s character, Christof. It’s a coming-of-age story infused with Jim Carrey manerisms – a perfect combination for this movie. In addition, the writing is clever and the ending is inspirational even to the harshest of critics (if this film even has any to begin with). The film ended up gaining three Academy Award nominations in 1998 and Jim Carrey won a Golden Globe for Best Performance By an Actor in a Motion Picture. 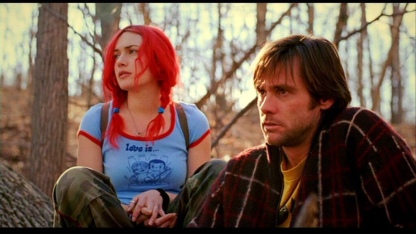 1) Eternal Sunshine of the Spotless Mind

Have you ever wondered if someone erased you out of their memories? The ideology of this film and that “what-if” question at its core – combined with the independent arthouse drama feel to it – bring out a different kind of quality that is not normally found in a Jim Carrey film. Much like Liar Liar, this film has a slight sci-fi edge to it, but clearly in a much different way. There are hints at comedy, but it is a romantic drama at its core. The best part is that it doesn’t rely on the typical tropes of the romance genre. At the heart of the story is the two main characters (one of them Jim Carrey’s character, Joel Barish) and the fact that they don’t end up together in the end, but instead not even remembering whom the other person is makes it hauntingly poetic. Jim Carrey also delivers a brilliant, dramatic performance (alongside Kate Winslet) that really displays his versatile range as an actor. The film won Best Original Screenplay at the 2005 Academy Awards while Kate Winslet was also nominated for Best Performance By An Actress in a Leading Role. Between the story, characters, and imaginitive imagery, this film ranks among the best in its genre and also the best Jim Carrey movie to date.

What do you guys think? Am I crazy for not having Liar Liar or Dumb and Dumber making the list? Did I have the wrong movie at #1? Let me know in the comments! Thanks for reading!