This critically-acclaimed CW series, based upon characters from Archie Comics and currently available for streaming on Netflix, has some awesome, multi-dimensional, and relatable characters (and actors portraying those characters), intriguing murder-mystery moments, fun Easter eggs and references (hint, hint, DC Rebirth), and a refreshing tone and take on this type of source material. This will be a non-spoiler review, but a few very minor spoilers may appear. The basic, end-all, be-all question I set out to answer by the end of this review is the following: is “Riverdale” a good show that I can recommend to others?

When I first saw promotional material for the pilot, I was immediately intrigued by the plot and tone that the show was going for. “Riverdale” turns the opportunity for a stereotypical high school drama into a fun, dark, and wacky murder-mystery with a high school template. The plot of the pilot, which sets up the entire season, begins with high school reject, Jugghead Jones (Cole Sprouse), narrating the story he is writing about all the events happening in the small town of Riverdale, which happens to be the content of each episode. The opening finds a high school girl named Cheryl Blossom (Madelaine Petsch) located on a rock next to Sweetwater River with a distraught look on her face. It is revealed that her brother, high school football star, Jason Blossom, has been found murdered and the investigation begins.

One thing this show nails is characterization. The show revolves around a small group of attractive, yet real and believable high school kids. Football star and up-and-coming musician, Archie Andrews (K.J. Apa), appears to be the focal character of the show. He might appear to be the perfect “boy next door” type of character, but he is written in a way that makes him much more flawed and relatable. His best friend, Jugghead, might be the best character on the show. The constant turmoil that his character deals with and continues to rise above is something admirable and inspirational in a sense. The “girl next door” to Archie is Betty Cooper (Lili Reinhart). She is another character that masterfully avoids being a stereotype. She has her own issues to deal with at home that complicate her life. Her best friend and new girl in town, Veronica Lodge (Camila Mendes), is probably a fan favorite. She has charisma and charm, but despite her rich family and endless talents, she gets caught up in the heart of the story.

One aspect of the show that has surprised me is the critique of parenting. All of the parent/guardian figures have decent intentions at heart, but don’t always live up to expectations. Veronica lives with her mother, Hermione Lodge (Marisol Nichols), in which it is revealed that Hermione is not a completely innocent parent (Veronica’s father is in jail, so I suppose he isn’t innocent, either). Betty’s parents, Alice Cooper (Mädchen Amick) and Hal Cooper (Lochlyn Munro), are control freaks and believe in discipline and perfection, which obviously leads to conflict with Betty and others. Cheryl’s parents, Penelope Blossom (Nathalie Boltt) and Clifford Blossom (Barclay Hope), run a $1 million syrup company and are probably the most problematic of the parents on the show. For two people that recently lost a son, they still seem quite cold and suspicious to viewers. The most unsuspicious and well-hearted parent is actually Archie’s father, Fred Andrews (Luke Perry). We do get to meet his mother, Mary Andrews (Molly Ringwald), but Fred is the parent that everyone wishes they had. He is the heart of all that is good in Riverdale, but that doesn’t mean he can’t be human, either. The plot seems to hammer home the idea that too much power and control can lead to chaos (like strict parenting, for example), but chaos has already become a staple for the town of Riverdale – which is fascinating as a viewer.

When the plot takes a break from the murder investigation and slows down, there are some great musical moments. Following not just Archie’s storyline involving music, but also a band named The Pussycats are excellent and fit the show perfectly. Obviously the song lyrics are meant to subtly reflect and reveal the feelings of the character singing, but the music itself has great replay value – even outside the show. It’s not only that the musical scenes have good music, but it furthers the plot of the episode and adds to it tremendously. This is one area of the show that I cannot wait to see expand with the characters and the plot. 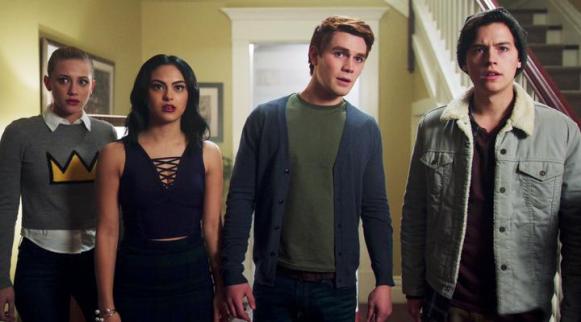 Every television show or movie has pros and cons to them, and “Riverdale” is no different. Don’t get me wrong, I like high school shows (including this one), but there is one particular aspect of the show that bugs me a little bit. I cannot understand why the show has an elaborate kissing scene in almost every single episode. Most of them actually work well, but it can feel overdone at times to a point where it takes me out of it and it loses its impact. In addition, certain characters hate each other during one episode, then get along really well the next episode, and then hate each other the episode after that. I find it to be a little odd and somewhat unbelievable. Plus, some of the dialogue doesn’t feel authentic at times, but it never took me out of any particular episode.

I think it’s obvious that there will be some kind of reveal at some point during the season. For me, I didn’t find that specific reveal to be very rewarding or impactful, which negatively impacts the entire murder-mystery subplot throughout the season. All of the build-up, twists, and turns in regards to the murder is actually fascinating and digs up new questions, but how it all concluded feels like somewhat of a letdown – although it is actually filmed really well. In fact, after I initially watched the finale episode, I thought it was a weak ending to such a good show. After taking some time to process it, I’ve actually come to like it quite a bit more, but not entirely. I’ll let you watch and decide for yourself. What I can say is this: the best scene of the entire season is in the season finale.

My only other minor gripe about “Riverdale” is based on the season finale. To me, I feel like I already know exactly what is going to happen in the next season. I like the idea of how they were setting up the next season, but I think they set it up a little too well – although, I have to admit, a particular scene with Archie and Veronica is pure gold.

With everything considered, I think this is a show that I can definitely recommend to potential viewers. The good easily outweighs the bad. The show’s producers, writers, directors, and tech crew (most notably: executive producer, Greg Berlanti, and composer, Blake Neely) have a hit-show on their hands. I think the part I like most about “Riverdale” is that while the first season is a success, the future seasons have so much potential and ability to elevate the show’s quality even more.