It hasn’t slipped by me that this is probably going to be a very controversial topic, and probably a lot of opposition to it, but it is in my firm opinion (one I’ve had for years before he was drafted into the NFL) that Christian Ponder has a future in the NFL. At this point, many are probably wondering why I think this way, and I have (Christian) pondered that as well for a while, until I came to a clear resolution recently. I’ll point out some things that most people have forgotten, which will hopefully make people open to thinking about the idea of him competing to start for whoever he might play for this next season, whether it be the Minnesota Vikings, or anybody else. 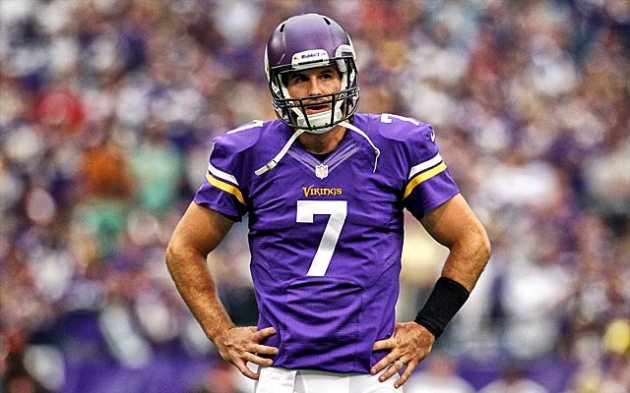 First off, remember his promising rookie campaign? He came off the bench in a blowout loss to the Chicago Bears and moved the ball pretty well, and in his first start against the Green Bay Packers at home, he nearly pulled off an upset. He played with an intensity that was missing from their offense (sorry Donovan McNabb) and gave them the spark they needed, while showing why they drafted him high. Yes, there were times when he made bad decisions and bad throws, but overall he had people excited to see what would happen in his sophomore campaign at the pro level.

Before people say he had a boring and almost horrific 2012 season, let’s just look a little more closely at it first. To start off the season, he played pretty well in the game against the Jacksonville Jaguars (20-27, 270 yds), and then dazzled in the home upset vs. the San Francisco 49ers. Yes, he sort of fell off into a slump after that, but it wasn’t like he was throwing a bunch of INTs or anything. I’ll even admit, there were some games that were so boring, I found myself yelling at the TV as well. Ponder seemed to struggle on the road the most, especially at the Seahawks (63 yds, INT), Bears (58 QB Rating), and Packers (2 INT in endzone, 41 QB Rating). What goes beyond those stats are the fact that he often couldn’t find wide open receivers, and then if he did, he would be inaccurate and the ball would never get there. Most of these occurrences would happen beyond 20 yards down the field.  When we got to crunch time and had to win out to make the playoffs, Ponder showed development and won us our final four games. He scrambled to get us more first downs and settled his feet in the pocket to make good, solid throws. In the final game at home against the Green Bay Packers, he played his best game as a pro. He threw 3 TD passes and led us down the field on the final drive while being injured to set up the game-winning FG by Blair Walsh. His presence was missed in the playoffs, as the Vikings struggled on offense with Joe Webb and were blown out by none other than the Green Bay Packers. Overall, he had 18 TDs and 12 INTs, and played well at the beginning and the end of the season, and still made people optimistic as to what the future might bring for this young quarterback. 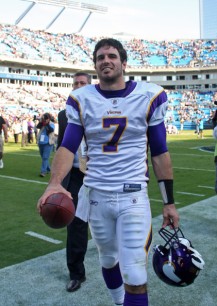 Forget the fact that he was benched twice during his third season, I still think he played some of his best football this past season. Yeah he struggled early on in the season to get anything going, like the 3 INT game against Detroit to start out the season. When he got his second chance at becoming the starting quarterback again, he showed the upside Vikings fans had been waiting to see. He really played well at Dallas, and he even had two games of over a 100 QB rating, being against the Washington Redskins and Green Bay Packers. An injury in the following game against the Bears ended his season short, but really played like a franchise quarterback the second half of the season. Yeah his record also wasn’t that great, but with a defense as bad as Minnesota’s last season, Peyton Manning would even have a tough time mustering up a better record.

From this point on, there is little I can say about stats. People can say what they want to say about Christian Ponder, but he has good mobility, can throw on the run, and when given time to throw, he has shown tremendous accuracy, even when throwing deep. Look him up on YouTube and watch the throws he makes. It is in my opinion that the Vikings will keep Ponder to compete for next season with Matt Cassel and a rookie quarterback probably not drafted in the first round. He has all the tools to succeed, it’s just a matter of time before it happens, whether it be in a Vikings uniform or a different one. I’m not saying he’ll make it to Canton one day, but he can play and probably will for a quite a while. Thanks for your time!